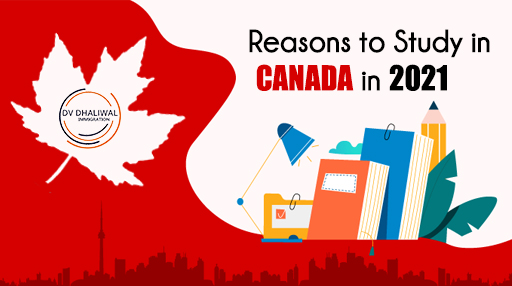 Reasons to Study in Canada 2021

Studies can take you far away to the global educational hubs. However, prior to making your choices to pick your favorite educational spot, it’s very important to thoroughly know about the place. Having a fair idea of the circumstances, rules and viable options of the place isn’t just a piece of information but, a better way to lead your life, therein.

Canada is one such top-rated and highly chosen place to study when it comes to overseas education. The country offers some of the finest degree and diploma courses that hosts a world-class education level, recognized globally. Getting a degree from a recognized Canadian university is of great value. It’s even considered equivalent to similar courses offered in the US, Australia, and other European Countries.

Another prime reason behind Canada’s high popularity is that international students get a perfect place to gain high-value education at pretty low fees as compared to other countries across the globe. There are several education consultancy service in Chandigarh that help in getting easy educational assistance for Canada.

This is the reason why Canada is home to several immigrants from across the world. Hosting an education system that offers an excellent international educational reputation, an excellent healthcare system, and a wide spectrum of well-networked social assistance programs, this is one of the best countries in the world offering excellent career and business opportunities, too.

Top Courses to Study in Canada

As known, Canada offers a perfect platform for higher education, here are a few listed courses that can be pursued from the country. Most of these are well demanded on a global scale and this is why, they offer immense job opportunities, soon after the course completion.

Top Reasons To Study In Canada

The quality of education is known to be the best when it comes to Canada. Right from the teaching faculties to the facilities for education, everything tends to be at par with the others. Apart from this, the living standards in Canada are ranked amongst the highest known countries in the world which definitely makes it a worth place to study and pursue your career.

Canada is a beautiful country. Around the country, the crime rates are low which makes it a pretty safe and peaceful country to live and study.

Another significant factor that can draw the attention of students is the fees structure for a course they are interested in. Courses offered in Canada are fee-friendly i.e. they are quite affordable. This simplifies all the problems concerning affordability of fees, making it a viable place to study.

As a part of earning your living, you have ample opportunities to work while you are still studying and make a living in Canada. This is the best way to be self-depended and take care of your expenses, even while studying.

The immigration options for moving to Canada are pretty convenient. This hassle-free process helps in retaining the interest of anyone willing to get into a course in the country. No hidden processing or troubling formalities to follow trying to get immigrated to Canada.

Being a place that fosters both education and safe and secure living, Canada is a quite favourable place to stay. Right from being a safe and sound country, low crime rate of the place is even envied, globally. Apart from globally accredited education, as a student one gets the perfect opportunity to be a part of the multicultural melting pot when in Canada.  Also, the society of the place is tolerant and comprises of broad-minded people with good economic strength and stability.

DV Dhaliwal are one of the best education consultant in Chandigarh offering a perfect way to land to Canada. Get in touch now! 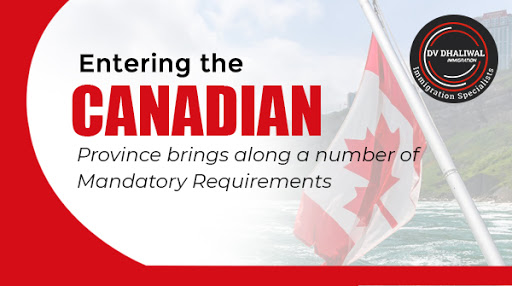 Meet the eligibility requirements of the Canadian province

Every individual looking towards entering the new avenues of their lives in Canada, often team up towards finding the best possible ways to get the Canadian Visa. There are a number of ways to receive the desired Visa processing in the most befitting forms. However, the two primarily considered ways are through the Canada PNP and the Express Entry Program.

Herein, we are throwing a little light on the projections and major things one is desired to be aware of both. Much in depth knowledge can be gained through the consultation at DV Dhaliwal Immigration Consultancy.

Both of these are referred to as the Canadian Visa entry program with a basic difference i.e. for PNP application, a job offer from a company in Canada should be initiated, however, for the express entry program, there isn’t any such mandatory requirement.

Each Canadian province and territory holds their own unique Provincial Nominee Program.

Each PNP holds a minimum of one immigration stream, aligned with the federal Express Entry immigration selection system.

The PNP program is mainly for workers who fall under any of these:

Have particular skills, education, and work experience for contributing to the economy of a specific Canadian province or territory

Are willing to live in any particular province

Are willing to become the permanent residents of Canada

Each province and territory holds its own â€œstreamsâ€ and requirements. Few of the streams may include any of the following:-

The application process for the same may depend on the Provincial Nominee Program stream one is applying to.

No matter what process you adopt, it is very important to undergo a medical exam and get a police check (certificate) before applying for either of these.

PNP is a process under which one has to apply to the province or territory for nomination under the non-Express Entry stream.

However, one needs to meet the eligibility requirements of the province, submit the application for permanent residence to Immigration, Refugees and Citizenship Canada.

Then pass the medical exam and get a police check (certificate).

Application processing may take longer through this [process as compared to the Express Entry Process.

Express Entry is referred to the selection system for Canadian immigration, which is designed for immigration of the selected skilled workers to Canada.
This involves a completely electronic process in association with the federal government, provincial governments, and the Canadian employers.

Individuals can apply under the Provincial Nominee Program (PNP) through the Express Entry process, if they have been offered a job in Canada.

Under the online Express Entry process, the major points to consider are:

Language skills are given a lot of weight for the Express Entry stream. The desired candidates need to submit their biometrics details, mandatorily. Express Entry draws are conducted almost every two weeks by The Immigration, Refugees and Citizenship Canada (IRCC). Tie-breakers are even applied in the Express Entry draws
These are few of the points to consider while applying for a Canadian visa under the PNP and Express Entry Stream.